Doctors suggested putting Zoe in an institution, advice her parents thankfully ignored. Now an Oxford University graduate, Zoe found love at 41 and is helping others with visible differences and low self-esteem.

Hi there! My name is Zoe (Anthea) Cross. When I did a Google search a while ago I discovered I’m a ‘different’ Zoe Cross to the Australian model. I’m a UK citizen but transferred to Germany for work 17 years ago. More on that later.

I’ve had a bit of an international life generally. I’m now 47 and was born in Munich, Germany, with Moebius syndrome. With Moebius, you cannot suck, one of the natural reflexes most babies have, so it took a while to figure out how to feed me. However, my parents were patient, and, most importantly, optimistic, and my father soon devised a way to squirt milk into me using an enlarged feeding bottle teat. Their optimism was definitely needed in those first years, especially as the doctors in Munich had said they might as well put me in an institution. I can’t say how glad I am they completely ignored that advice!

Six months after my birth, my parents and I moved to north of Dublin, Ireland. It was there, when I was two years old, that my parents finally got a diagnosis, Moebius syndrome. That was still pretty lucky – because the syndrome is so rare, there are a number of people my age who only found out much later in life that what they have goes under that term.

On the whole, I was reasonably popular at my primary school in Ireland. There were some bouts of bullying, once or twice resulting in injuries and having to be collected by my parents because of sustaining head injuries – this did make me scared of boys for a while. On the whole, my teachers were very supportive. However, initially, some parents were reluctant at first for me to join their children in school! It soon turned out I was one of the brighter kids.

Moving from Ireland to Germany at age 9

My family moved to Germany for my Dad’s work in 1981). School holidays were often spent in the UK, visiting family in Oxford and in East Anglia. School had its social challenges, but I learned to cope in my own way with regular taunts and sometimes physical violence. I became quite a shy child as a result. Although my school results were generally good to great, I found it very difficult to speak in class. Psychological help was offered by the school, but my parents had negative associations with that and refused. I myself was influenced by my family and had a great fear of therapy or anything that remotely ‘smelled’ of ‘headshrink stuff’. It would take me years to find out the truth.

Finding employment – with a facial difference

My father strongly encouraged and supported me to go to university, thinking that a) I was totally capable of it and b) that with my different appearance, it would greatly boost my self esteem and impress future employers to look beyond my appearance and limitations. I took the Oxford University entrance exams and interviews, and graduated in 1996 in Oriental Studies, Japanese, from Somerville College, Oxford.

Finding a job was pretty tough for me, nevertheless. I got plenty of interviews (my CV obviously looked quite impressive), but hundreds of rejections. With hindsight so many years later, I would do things differently now and would always volunteer information about my condition at the end of an interview. At the time, I had learned just to completely ignore it and soldier on regardless. This of course left questions in potential employers’ minds, “What is wrong with her? Is she really up to the job?” And nobody ever dared to ask me what was ‘wrong’ with me. I think I could have made that so much easier if I had opened up about it. But that was my upbringing – I felt self-indulgent talking about it at the time.

Fortunately though, I was also brought up to be very persistent and tenacious. Eventually, I found my first job, in the UK, in Gerrards Cross, as a technical translation proof-reader. Soon afterwards, I was also offered a job in Japan, so I took that for a year, a unique opportunity. Then, in 1999, I found a job near Uxbridge with a Japanese electronics manufacturer in 1999. In 2002, I transferred with the company to Germany, where I remain until this day. My job is environmental (legal) specialist, and my speciality European environmental law, which I did a part-time Masters in from 2002-2004. It definitely hasn’t always been easy, there have been amazing times, but also some very, very difficult times, including bullying. On the whole though, I am hugely grateful for the help I sought and received inside and outside the company.

Finding ways to cope, and then thrive – and finding first love at 41

In 2006 I discovered group business coaching for women, as I felt in need of some support. Over the next couple of years, I slowly came to realise just how powerful coaching was, how much it can empower people to change their outlook on life, to accept some conditions and move on to achieve amazing goals and even dreams. It is also my firm belief that coaching is not just for the wealthy and powerful, but should be something that anyone should consider in improving themselves, their lives, and the lives of those around them. We with facial differences need to be or to grow especially strong, and should learn to seek ways to continuously work on our self-esteem, as there will be more than enough instances when we will face lack of understanding or downright ignorance in our daily lives or when trying to receive medical and emotional support. I also firmly believe in raising awareness of our issues – words fail me when I think of the amazing work that Facial Palsy UK and Changing Faces are doing. But I also know that we also owe it to ourselves to do whatever we can to raise our self-esteem and to find strength in the face of adversity wherever we can. 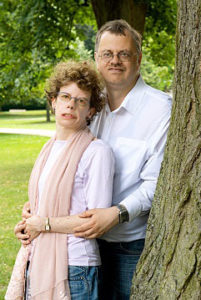 In late 2012, I escaped from a very unpleasant bullying situation, and I did two things: I qualified for disability status in Germany because of Moebius syndrome. And I trained as a professional life and business coach. And something else amazing happened too! I made my first faltering steps in looking for love. I had never really dared to admit, even to myself, how lonely I felt at times, until one day I was confronted by a new friend. The rest is part of a book I am writing, but, at 41, I had my first kiss. Two short relationships later, I am now about to celebrate my fourth “anniversary” with my partner.

In recent years, thanks also to my coaching qualification (and further intense coaching for myself), I have been becoming more and more active in supporting other people with visible differences and low self-esteem. Now I have developed a number of specialised coaching programmes for people with a visible difference, and offer them online (regardless of location), including one-on-one coaching via telephone or via video conferencing software.

Find out more about Zoe at www.zoe-cross.com (English website version due for completion in Autumn 2019).

Disclaimer: Please note that views expressed are person’s own and should not be considered a recommendation of particular medical treatments, therapies or surgeries. We would always advise you seek advice from a health professional with experience in facial palsy who can assess your individual needs.

We can only continue our work with your help, please consider making a donation to Facial Palsy UK today.

We are always keen to share people's stories about facial palsy and raise awareness about the various different causes.

Raise funds for Facial Palsy UK and be in with a chance of winning £25,000!

We use cookies to ensure that we give you the best experience on our website. If you continue to use this site we will assume that you are happy with it.OKView our Privacy Policy